We look forward to welcoming you to our historic space

In 2004, we moved into the heritage building that houses the Saskatoon Public School Board Division Offices.

When we relocated our office to the historic Eaton’s building in downtown Saskatoon (known to many as the Army & Navy building), we aimed to create an environment that was modern, clean and inviting while respecting the space’s history and showcasing some of the character elements that remain.

The result is a dental practice that we hope you will find comfortable and welcoming, with a nod to Saskatoon’s rich history. 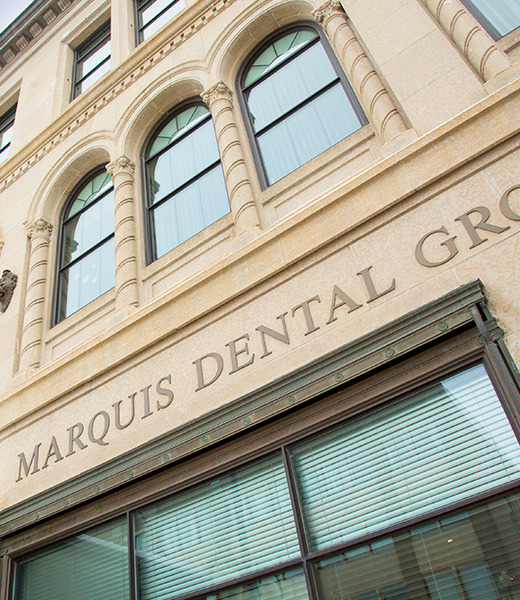 The Eaton's Building, constructed in 1927, was originally intended to be eight stories, which would have made it the tallest building in Saskatoon at that time.

Built to stand at just three stories high, the building had a grand and lavishly appointed interior that included ornate fixtures, an art gallery, a meat department with an 80-foot marble counter, and a Mediterranean-style dining room. King George and the Queen Mother toured the building in 1939. Even though it hasn't been functional for many years, the 90+ year old escalator, the first such contraption in the province of Saskatchewan, remains a fixture in the building.

Eaton's relocated to Midtown Plaza in 1970. In 1971, the building was used to house athletes participating in the Saskatoon Canada Winter Games. In 1973, the Army & Navy department store opened their doors in the Eaton's Building, where they remained until 2000.

At its peak, the Saskatoon Army & Navy employed 320 people and was a fixture of Saskatoon's downtown core.

Following the Army & Navy's closure in 2000, the Saskatoon Public School Board acquired the space and began a $9M renovation. The building was revitalized and became a showcase of its original character and history.

The building also allowed for some commercial space on the main floor. Marquis Dental, wishing to serve the dental needs of those living, working or visiting Saskatoon's downtown core, began renovations.

Marquis Dental has been serving the Saskatoon community for more than 35 years, and we believe the heritage space is a great fit for our practice.

Join our dental family and book an appointment with Marquis Dental Group today.

We are a proud member of
the